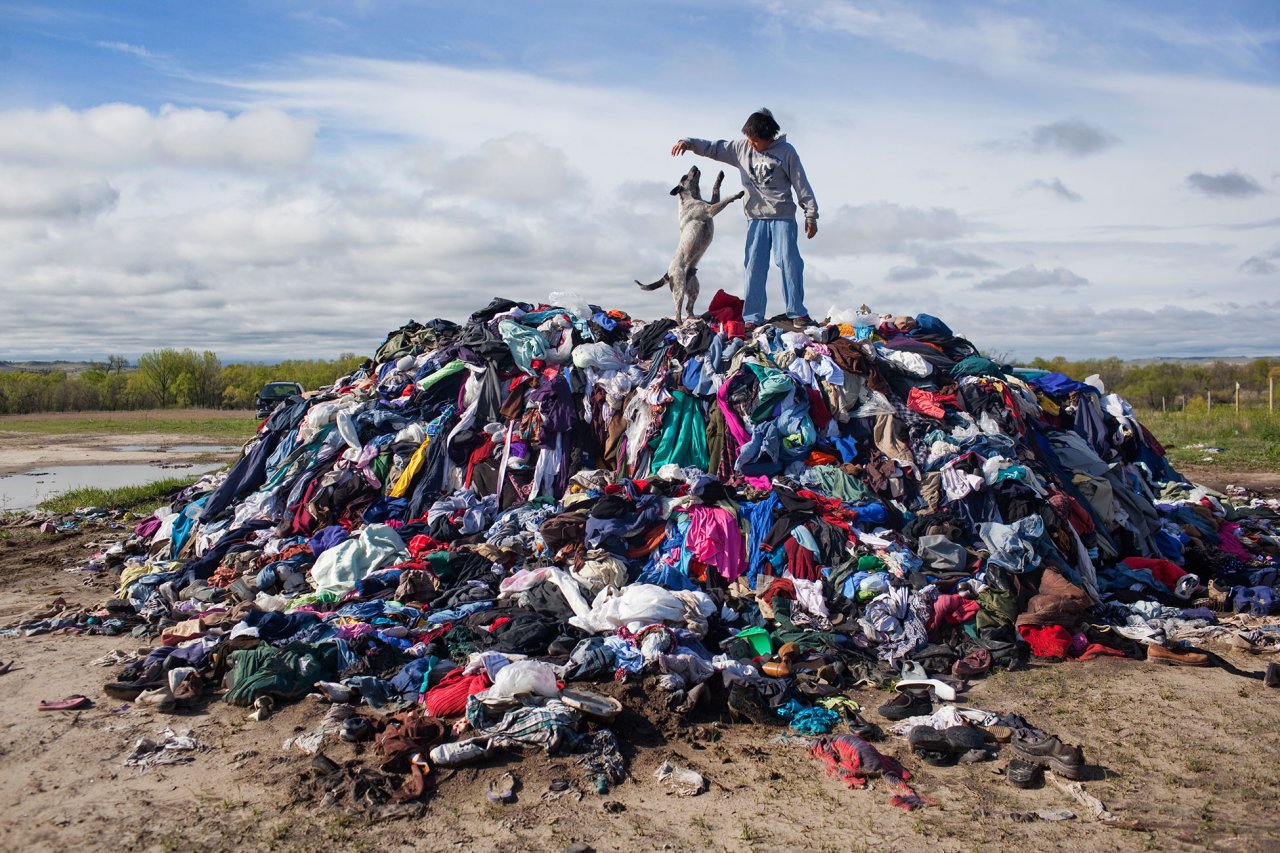 5. Mitchell Crow plays with his dog on what remains of 28,000 pounds of donated used clothes near Loneman, South Dakota. Unclaimed, the rain-soaked handouts go mouldy during summer. 6. A horseback rider on the Crazy Horse Ride travels from Chadron, Nebraska to the Crazy Horse camp at Beaver Wall, to commemorate the life and death of the great Lakota Warrior. 8. A buffalo skull left to dry on a fence post near Oglala, South Dakota, will be later used in the Sun Dance ceremony. 9. The camp of a Native American resistance group in Porcupine, South Dakota, flies the American flag upside down as a symol of disrespect to the occupying power. 11. Three-year-old C.J. Shot bathes among dishes. the Oglala concept of tiospaye (unity of the extended family) means that homes are often overcrowded, especially with the severe housing shortage on the reservation. At the time of this photograph, twenty-two people lived in this three-bedroom house in Manderson, South Dakota. On 29 December, 1890, the US 7th Cavalry surrounded a Sioux encampment at Wounded Knee Creek in South Dakota and massacred Chief Spotted Elk and three hundred prisoners of war. After the so-called battle, twenty Congressional Medals of Honor were awarded.

Today the Oglala Lakota live in the shadow of Wounded Knee on the Pine Ridge Indian Reservation.

I started photographing on Pine Ridge in 2005 as part of a story about poverty in America. In the beginning, it was all just statistics: a 90 per cent unemployment rate, a 70 per cent school dropout rate, and a male life expectancy of 47 years. Over time, it became clear to me that these statistics came from a deep historical wound. And then my photographs of Pine Ridge became a story about a prisoner-of-war camp, a story about genocide, a story about stolen lands.

Years after beginning this project, the story and my relationships on the reservation are more complex than ever. The story has evolved to be about my family, about the people who call me brother and nephew and uncle.

‘Mitakuye Oyasin’, translated to English, means ‘All my relations’. The Okala Lakota say this at the beginning and at the end of ceremonies. One of my brothers, Andrew Ironshell, says it means ‘a responsibility, almost a call to action, or an acknowledgement that you are a relative to the land, and to the environment and the human beings around you’.

I have stumbled into something sacred on Pine Ridge. I don’t know which part is the ceremony. I think, maybe, it is the whole thing.

‘But as everyone will surely know, that’s not what came to pass.’

‘It was, she thought, like trying on made-to-measure garments that have been tailored for someone bigger, smaller, rounder, thinner than you could ever hope to be.’

Read an excerpt from The Great Homecoming by Anna Kim, a novel of love and loss in the wake of the Korean war.

A short story by Jianan Qian on stray dogs, desperation and re-education in rural China during the Cultural Revolution.

Anatomy of a Cheeseburger

‘Ray Kroc, one of the founders of the McDonald's hamburger chain, changed American eating habits as effectively as Henry Ford changed the way Americans travel.’