Slip of a Fish

‘Charlie’s swimming. Six strokes then she turns to breathe, six more and all the way to the end of the length. She’s a swimmer, Charlie. She’s a bit of a fish, a slip of a fish.’

It’s the number of strokes she has to hold on without breathing in. It’s all about holding on, and Charlie wants to go to ten, she always wants to go to ten, but you have to start at two. That’s the only rule, start easy and work up. Although it isn’t always easy to swim properly in here. Sometimes, you have to wait for whoever’s in front of you to touch the wall. Sometimes, whoever it is swims towards the wall, then stops swimming and starts gliding, with an arm outstretched, two arms sometimes, reaching, ready to touch the wall, ready to tag it. Everyone tags the wall, and almost everyone slows before tagging, because they’re stretching and gliding, and sinking a bit. Sinking, instead of swimming, even though the thing they want most of all is to get to the wall. People stack up behind them, but they keep on, arms outstretched and sinking a bit. And people are waiting. Sometimes quite a few people are waiting. Abbott says you have to. Wait, he means.

‘At least you’re safe in there though,’ he says.

Charlie’s swimming. Six strokes then she turns to breathe, six more and all the way to the end of the length. She’s a swimmer, Charlie. She’s a bit of a fish, a slip of a fish. I can hardly think of her without thinking of water. There she is in my mind’s eye, half submerged. There she is, sliding away under skins of brown or green or yellow or blue. An arm here, a leg there, a torso, a head, appearing then disappearing.

There. Charlie, light of my life, swimming six, down the lane, towards me.

At least Abbott can stop worrying.

‘At least it’s clean. At least you know where you are with the baths,’ he says.

And he’s right. We’re not far from the bottom of our hill. The red sign, the revolving door, the changing cubicles with yellow curtains. We know where we are.

‘All the time,’ he says, and shakes his head.

We tag the wall then Charlie stands up. She straightens her goggles. She looks towards the far end.

She says, ‘I’ll go after that man, the one with the magpie tattoo. When he’s tagged the wall, that’s when I’ll go.’

She means she’ll try ten. She’ll try holding on to ten, although she’s never held on that long before, and her face is already red.

She holds her fingers up, presses all ten against the air. And perhaps this time will be the time, because the difference between nine and ten is only one, but it’s always been too far.

She’s swimming back towards me with her head above water.

Abbott’s never been taught to breathe. He used to come to the baths with us when Charlie was small and already going under. He said going under was something all babies do until they learn not to.

And sometimes he’d go off and swim a length or two with his neck stiff, his legs down and his face clear of the surface.

Once, after he’d swum his lengths, I told him it was safe, perfectly safe, to put his face beneath the surface. I offered to show him how.

‘You don’t have to swim at first. You can stay where you are. All you have to do is put your face under and breathe out,’ I said. ‘I can hold your hand.’

I think I might have said something about a seahorse too, because that’s what he reminded me of when he swam. Anyway, he shook his head.

He shook his head.

I remember, because his hair was dry.

And now Charlie wants to play the floating game. She wants to know if Abbott can float.

We need waves. There are always waves in the baths. There are always people. It isn’t like the lake, where the water can be still enough, sometimes, to catch the ripples from a dipping toe, a dragonfly. Yes, that’s how it can be, the lake, although not often, only sometimes. But here, always, the thrashing of arms and legs, the twisting and writhing, don’t disappear, but come back. Like the flapping of butterfly wings, I suppose. Almost.

She holds onto the wall and stretches out her arms, so her body and legs come up behind her.

I hold the wall. I stretch out my arms, and on the count of three we have to put our faces in and let go. We can breathe if we want, when we want, but we have to let the waves carry us.

Charlie counts. Charlie’s always the one who counts.

The lifeguard blows his whistle. He blows twice, and we’re floating, like things, like boats, like that boat. The little rowboat. Two sharp blows on his whistle, and Charlie tugs at my arm and I can feel in her tug, in the way she pulls, it’s time to stop floating, it’s time to breathe, although there’s something about holding on, something about being pushed and pulled and Charlie pulls, tugs, and I need to breathe, but breathing, even though I need to, desperately need to, isn’t at all like the first breath.

The lifeguard points at us from his tall chair. He points at me and Charlie, he points at us, and Charlie says, ‘We should swim. Now.’ And we swim. And maybe the lifeguard thinks something’s happened, maybe he thinks we’re dead. Maybe that’s what lifeguards are trained to think when you float, the way things float, with faces turned into the water. We swim towards the shallow end, best front crawl, breathing every three strokes, the way we’re supposed to, and when we get there Charlie stands up, and once she’s standing the lifeguard stops looking, and on the way home she says she promises. She promises she won’t tell Dad.

I went into Abbott’s study to find that book, the one about the man who took his rowboat out in the storm. Charlie was at school and Abbott was at work, and the house was quiet. Thinking about it now, there was an air of anticipation about the place, as though something sleeping was about to be woken. It was quiet. Quiet enough for reading, so I went into Abbott’s study to find the book.

I pulled it from the shelf. It was exactly as I’d remembered it; a small paperback, black, with a painted flame, one line each of yellow and red and white. I knelt down on the floor of Abbott’s study and read.

Signe lies on a bench.

That’s how the book begins. That’s how it almost ends too. Signe lies on a bench and sees herself. She sees herself and she sees her husband, Asle, before he went out on the fjord, twenty-three years in the past. It was more or less how I’d remembered it, Signe lying on the bench, seeing herself and Asle, already knowing Asle can’t come back.

I told myself I didn’t have to read another word. But I read, and I must have been reading for a while, because I was getting pins and needles from kneeling down for so long. I sat down, then laid on my back. I carried on reading like that, lying on my back, on the floor of Abbott’s study.

I went on with it. I couldn’t put it down. I was searching for something to hang on to, something to grasp and make everything else fall into place. I looked everywhere. I searched through those words, but there wasn’t anything. All I could find was Signe lying on the bench, that was all I could find, and it wasn’t enough. One woman, lying on a wooden bench. It wasn’t enough.

My phone buzzed in my pocket. It was just like Abbott to be there when I needed him. I read on a bit. It was difficult to put the book down, and anyway, I was comfortable lying there on my back. The feeling of his buzzing had calmed me a bit. Here we are, I thought as I read. Two women, lying on our backs. Although I knew Signe couldn’t lie down indefinitely.

My phone buzzed again. I took it out of my pocket and looked at the screen.

Can you get the lasagne out of the freezer? A.

I’d said before, there was no need to sign off with an A. ‘I can already see your name,’ I said. ‘And it makes it feel like the beginning of something else.’

‘A sentence beginning with A. Any sentence. Like that one.’ ‘Which one?’ he said.

I closed the book. I put it on the floor and stood up. I wanted to get the lasagne out of the freezer but I couldn’t get over the feeling that Signe was lying on the bench inside the book, that she would still be inside it if I walked away.

It happened before. The first time I read that book, or maybe it was the second, I woke in the night. I had to ask Abbott if he wouldn’t mind taking the book, although I meant the words, away from the bedroom. I asked him politely. He said he was sleeping. He couldn’t have been.

He propped his head up with his elbow and laughed.

But that was later.

I wanted to get the lasagne. I was standing in Abbott’s study. The sun had taken over the whole room. Its fingers reached down into the space between the carpet and the door. I wanted to get out, go to the freezer, but I couldn’t leave the book. I was looking down at the book, the sun on the book, and thinking about the words, one next to the other, spreading.

Then I opened the door and ran.

I had the feeling the words were following me, I thought I felt them brush around my neck, then tighten a little. But Abbott’s always said I’ve got a fertile imagination. 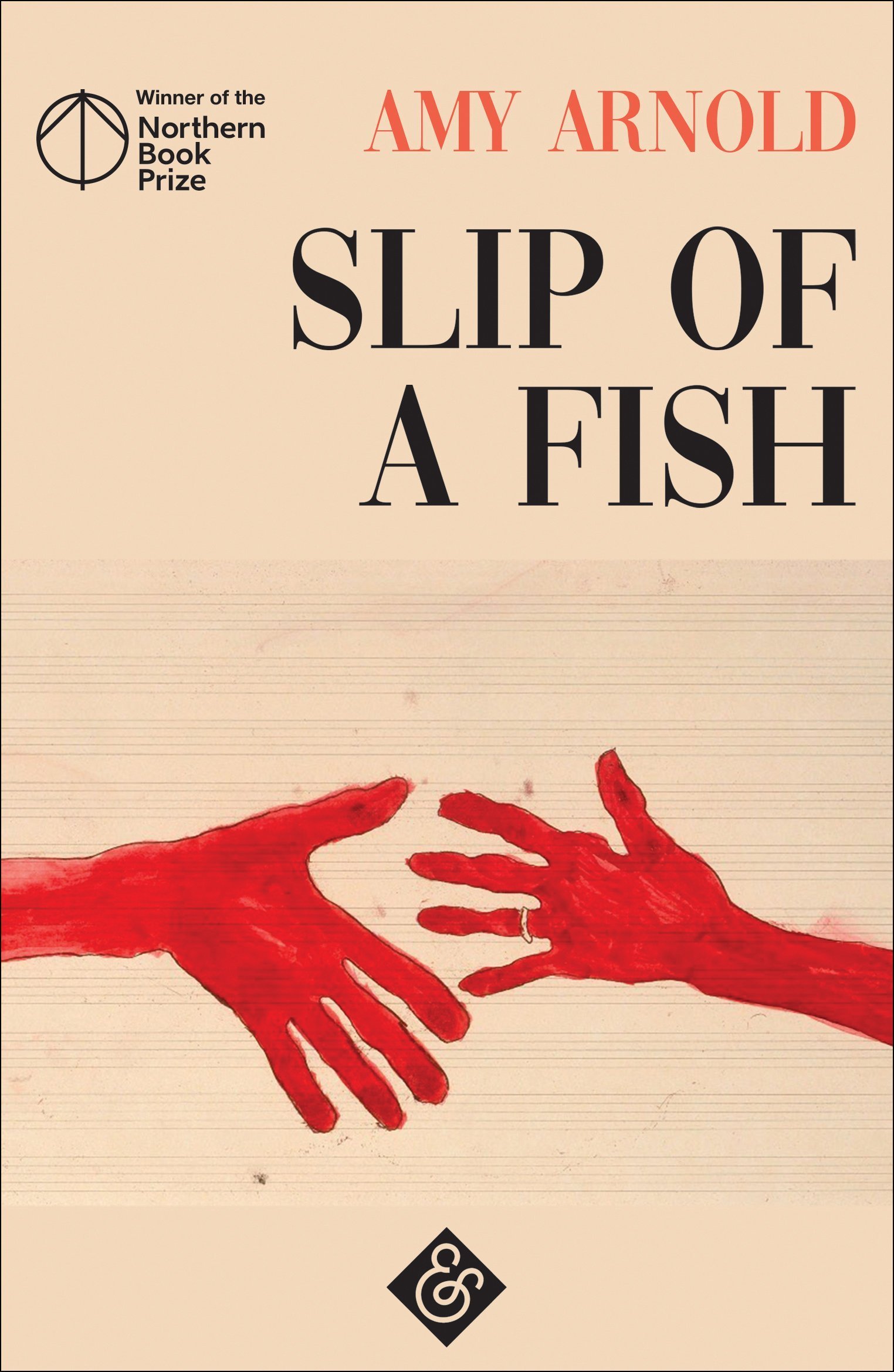 The above is taken from Amy Arnold’s debut novel, Slip of a Fish, winner of the 2018 Northern Book Prize. Order your copy here.

Amy Arnold was born in Oxford in 1974. She studied Neuropsychology at Birmingham University and has worked in a variety of jobs from packing swedes to teaching and lecturing. She lives in Cumbria, and in 2018 was awarded the inaugural Northern Book Prize for her debut novel, Slip of a Fish.

‘The moments of relief in this awful year that will stick with me are roaming around at strange hours, walking in the middle of the road.’

‘I’m not dead yet / so why are the mourners here?’

An excerpt from the graphic novel, Return, by Niki Bañados.

A Note on Shakespeare

‘Shakespeare writes of the open wound and, through him, we know it open and know it closed. We tell when it ceases to beat and tell it at its highest peak of fever‘, Harold Pinter in 'A Note on Shakespeare' in Granta 59: France: The Outsider.